YouTuber BLAINES just showed off a quick get rich scheme that any player can use in Pokemon Brilliant Diamond and Shining Pearl.

Of course, money can come at a premium sometimes in Pokemon. Collectathoners might be able to find enough Nuggets and Big Musshrooms to sell and get rich, but the average Pokemon trainer might not. Fortunately, this scheme requires only a small glitch that is fairly easy to input. 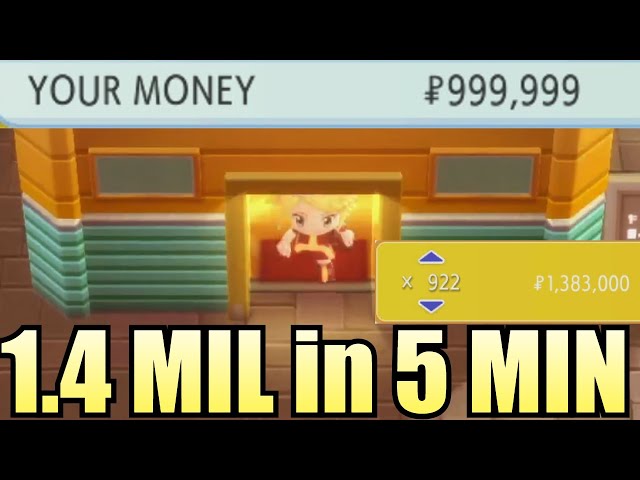 In order to perform the glitch that BLAINES uses, Pokemon trainers are going to need at least 163,000$ on them. This is so they can buy enough resources to exploit the glitch.

The other thing Pokemon trainers will need to do before they perform the glitch is head over to Oreburgh City and head Underground. Slightly above them will be a trader that is there everyday, and he exchanges gifts for gems.

Once that’s figured out, the next step is to go to Veilstone City and buy a bunch of pedestals. This is why players need 163,000$: with that amount of money, they can buy an amount of pedestals that trades for the maximum amount of spheres (Square Pedestals for blue gems, Round Pedestals for red gems).

The next step is to actually go to the Veilstone Underground and find the trader who trades pedestals for gems. Around 80 pedestals will earn the player 999 gems, so they can trade this number twice with the 163 pedestals they should have.

From there, players will want to talk to the same trader and trade all of the small gems they earn for the maximum amount of large gems with the same color. After that is when they need to go back and talk to the trader in Oreburgh.

This trader will give 40 small gems for two of the large gems the player has. This is where they would perform the menu glitch, though. To perform this, players need to hit up an A at the same time. This will move the cursor to another item, but the purchase confirmation will still be active.

When BLAINES did this, there was the TM for Rock Slide available at the bottom of the menu. So, he moved the cursor to the gems and performed the glitch to essentially buy TM80 for all of the gems that he acquired.

Throught this method, BLAINES got 920 TM80s. The exact amount of money a player would earn for selling all of them is 1,383,000$. Therefore, he turned around 200,000 and turned it into a little over 1,000,000.This glitch can be repeated by any Pokemon trainer until they are rich.