A group of anti-vaxxers including a former Neighbours star have filmed themselves screaming at Salvation Army staff after plastering hand-written signs on the storefront.

The group’s leader, Damien Richardson, who played Gary Canning on the hit soap, was seen harassing one of the workers outside the op shop on Bourke Street, in Melbourne on Wednesday morning.

They had earlier stuck up signs with anti-vaccination slogans such as ‘God does not discriminate’ and ‘Op shops are essential services’, while shouting at workers to let the unvaccinated in. 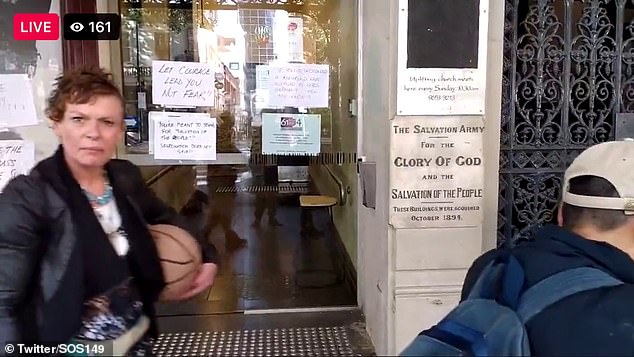 The chaos erupted as a woman who had spent years living homeless on the streets of Melbourne stepped in to defend the Salvation Army staff.

‘Come have dinner with us, sleep with us out here on the street. Start learning about it!’ she is heard shouting back to one of the anti-vaxxers while holding a basketball.

‘I’ve been on and off this streets since I was 13-years-old alright? And I will stick up for these guys as much as they’re a***holes, and I’m an a***hole to them some days.

The group had earlier stuck up one sign that accused the charity workers of breaking ‘commonwealth and international laws’.

As charity stores and op shops aren’t listed as essential services in Victoria, visitors over the age of 12 must be fully vaccinated in order to enter.

Store workers were seen telling Mr Richardson that toys from the store were on offer to everyone ahead of the Christmas period – regardless of vaccination status. 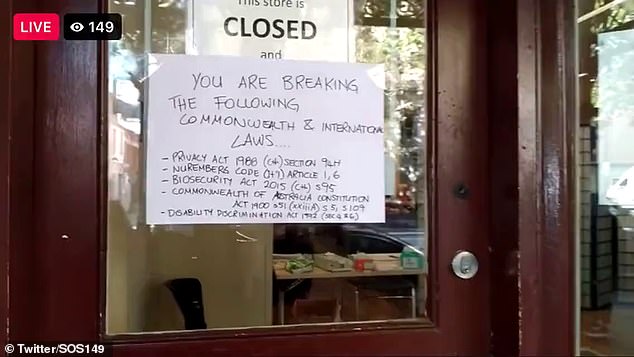