The daughter of a driver whose truck ploughed into five cars in a horror crash that claimed the life of a toddler holds grave fears for his mental health.

A two-year-old girl died at the scene after Matt Livingston’s truck careened out of control on the Calder Freeway in Victoria.

The girl’s parents, aged 35 and 37, were seriously injured when the 42-tonne truck overturned and crashed into their car about 2.30pm on Monday.

Their other child, a one-year-old girl, was discharged from the Royal Children’s Hospital in Melbourne on Tuesday evening. The family lives in Caulfield South in Melbourne’s south-east. 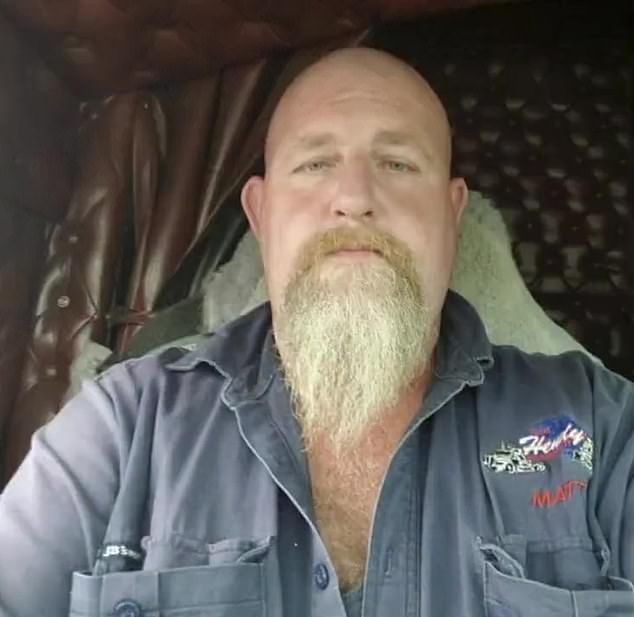 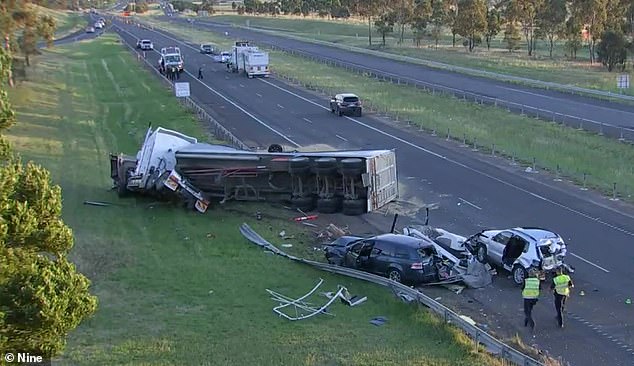 ‘I will be surprised if he can survive his own mental health after this,’ she told the Herald Sun.

‘A car swerved in front of him as shown on dashcam footage. It’s much more difficult for a fully loaded truck to brake than a normal car.’

Jarrod Bell of Victoria’s State Emergency Service said it was a ‘confronting’ scene to attend.

‘Six vehicles and five people trapped, this is one of the largest and most complex calls I have attended in a decade,’ he said.

‘Any incident involving a child is challenging but when we are dealing with the death of a two-year-old that breaks my heart. This call is something that will sit with us for quite a while.’

Police are investigating several factors around the circumstances of the crash.

‘We are too early in the investigation to come up with those answers – whether there is involvement of excessive speeding or drugs, or anything like that,’ Detective Sergeant Mark Amos said.

‘It is simple physics why this happened and if people don’t show some responsibility and respect it, then this will continue… and other families are going to have the single worst Christmas of their lives.’

A 62-year-old man whose car was also hit is still at Royal Melbourne Hospital in a serious but stable condition. 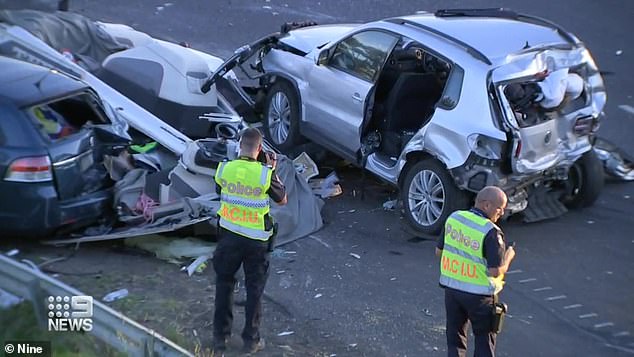 Police told Daily Mail Australia the crash was still under investigation, and pleaded for anyone who may have seen it unfiled to come forward.

Distressing images showed grain and debris strewn across the highway, which was closed when emergency services arrived on the scene.

Onlookers said the wreckage was the worst they had ever seen.

‘Drove past this just after it happened and I felt sick to my stomach. Terrible,’ one woman wrote on Facebook.

Others who were stuck in traffic as a result said they broke down when they saw the tragedy on the news.

A car in front of the semi-trailer appears to swerve into the right-side lane, prompting the truck to do the same.

But the truck crashes into the back of a vehicle and a massive multi-car collision follows, ending with the semi-trailer toppling over. 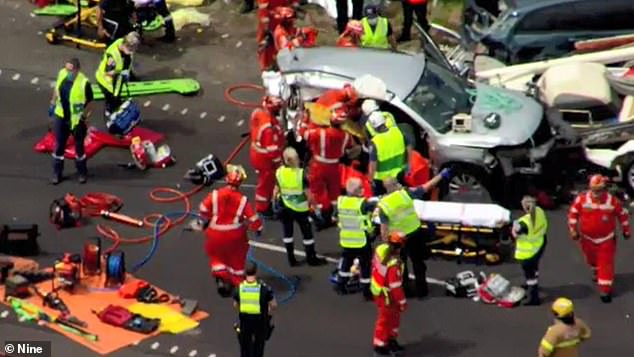 Emergency crews rushed to the scene on the Calder Freeway in Melbourne ‘s north west, just after 2.30pm on Monday 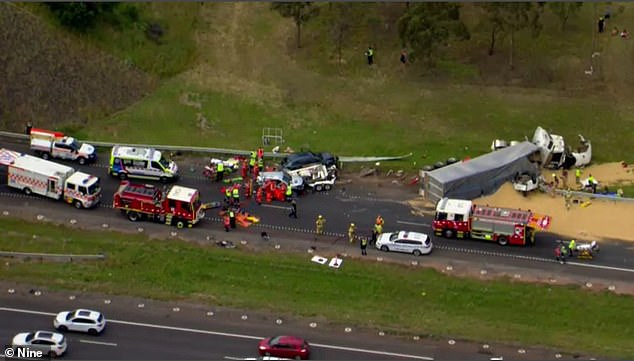 A two-year-old girl died. Her sister and parents are in critical condition after a horror smash on a busy freeway (pictured)

‘This is a catastrophe, this is an absolute disaster,’ Detective Amos said, imploring motorists to slow down.

‘It’s monumentally frustrating to see this sort of stuff… take your time, slow down, look after each other.’

Aerial images showed the large truck on its side with the grain covering much of the road.

Debris from other cars was also strewn across the freeway including a vehicle that was towing a boat.

Craig Anthony Whitall had meth, Valium, methadone, marijuana, and doxepin his system when he veered on to the wrong side of the Princes Highway at Mondayong on the NSW south coast and smashed into the car carrying Home & Away star Jessica Falkholt and her family on Boxing Day.

Parents Lars and Vivian Falkholt died at the scene, while sisters Jessica and Annabelle were helped out of the wreckage by passers-by, but died later in hospital. Whitall also died in the crash.

Sienna, 8, Angelina, 12, and Antony, 13 died alongside their cousin Veronique Sakr, 11, after being struck by a ute as they walked on a footpath to get ice cream in Oatlands, Sydney.

The driver who killed the children was sentenced to at least 21 years in prison after pleading guilty to four counts of manslaughter, among other charges.

The 43-year-old was dubbed ‘Australia’s most hated man’ by a judge after he filmed dead and dying police on Melbourne’s Eastern Freeway in April 2020.

Senior Constable Kevin King, Constable Glen Humphris, Leading Senior Constable Lynette Taylor, and Constable Josh Prestney were hit by a truck while they discussed impounding Pusey’s Porsche after he was pulled over for speeding at 149km/h.

The toddler was sitting in the back of a Volkswagen SUV when a semi-trailer carrying grain crashed into their car and two others on Melbourne’s Calder Freeway just after 2.30pm on Monday.

Her parents, 35 and 37, were raced to hospital along with her one-year-old sister.

A man travelling in a separate vehicle is also in critical condition after being trapped underneath the truck until firefighters cut him free.