Former WWE writer Vince Russo had some advice for AEW boss Tony Khan as Russo felt that Tony had taken up too many roles in AEW and is not giving sufficient time to be a booker.

Vince Russo was part of both WCW and WWE and his time as a booker coincided with wrestling entering the hottest phase in history in terms of mainstream appeal and popularity. The product at the main event level was amazing while the ratings were at unbelievable heights.

With AEW and WWE being the top two companies in the world right now, Vince Russo stated that Tony Khan and Vince McMahon have too much on their plates while being a booker is a full-time job in itself. While talking to Dr. Chris Featherstone of Sportskeeda Wrestling, Russo said the following:

“When I was the head writer of RAW and SmackDown, that was my job, bro, seven days a week. That’s all I concentrated on. That’s all I did. You’re looking at two guys now, in Vince and in Tony Khan, that wear 15 other hats and they’re not spending the time with creative and with new talent coming in.”

“Tony Khan, bro, I crack up because every time they talk about him on a site, he’s got like six titles in front of his name. Every time there’s a new title! Bro, head writer, head booker, whatever you wanna call it… is a full-time job,” Russo added. 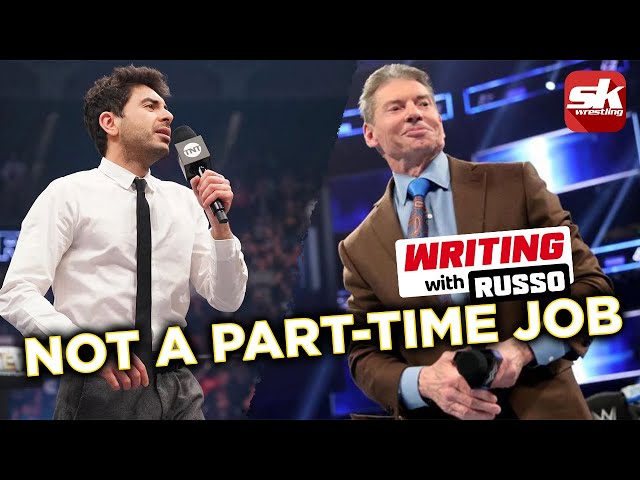 What is Tony Khan’s role in AEW?

Wednesday Night #AEWDynamite  LIVE on @TNTdrama TONIGHT across America (& we’re LIVE 8pm ET/7pm CT/6pm MT/5pm Pacific each week for the rest of our run on TNT through December ‘til Dynamite moves to TBS in January 2022), don’t miss the last Dynamite before #WinterIsComing TONIGHT

Wednesday Night #AEWDynamite  LIVE on @TNTdrama TONIGHT across America (& we’re LIVE 8pm ET/7pm CT/6pm MT/5pm Pacific each week for the rest of our run on TNT through December ‘til Dynamite moves to TBS in January 2022), don’t miss the last Dynamite before #WinterIsComing TONIGHT

Tony Khan has been a lifelong wrestling fan and when Cody Rhodes, Kenny Omega and the Young Bucks needed someone to believe in their vision, he stepped up. Currently, Tony Khan is the president and CEO of All Elite Wrestling and he’s also the head booker, general manager as well as in-charge of talent acquisition.

Tony Khan was instrumental in convincing Bryan Danielson and CM Punk to join AEW. Recently, it was confirmed that Tony Khan oversaw the creative process in the company as he did not want to make the mistakes that WCW made with regards to handing over too much creative control to others within the company.

Apart from AEW, Tony Khan is the co-owner of the Jacksonville Jaguars and Fulham Football Club.