Latino voters are now evenly split between the two parties instead of being a Democratic stronghold, new polling finds

Latino voters are dividing their support between both political parties, which is bad news for the Democrats, who have historically counted on the minority group for outsized support.

A new Wall Street Journal poll found that when Hispanic voters were asked the party of candidates they’d support in the Congressional elections next year, 37 per cent chose the Democratic candidate, while another 37 per cent said Republican. 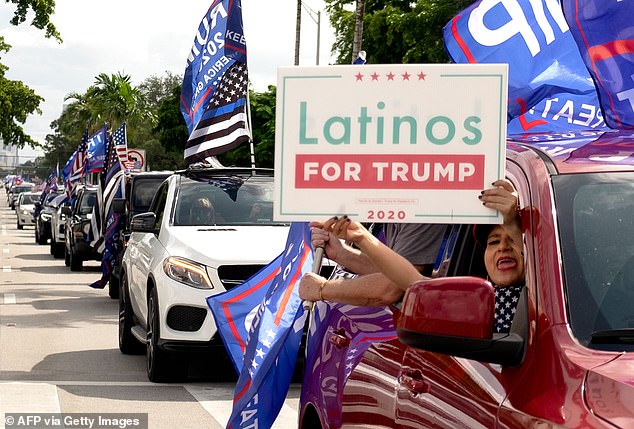 Supporters of former President Donald Trump hold up a ‘Latinos for Trump’ sign in Miami, Florida in October 2020 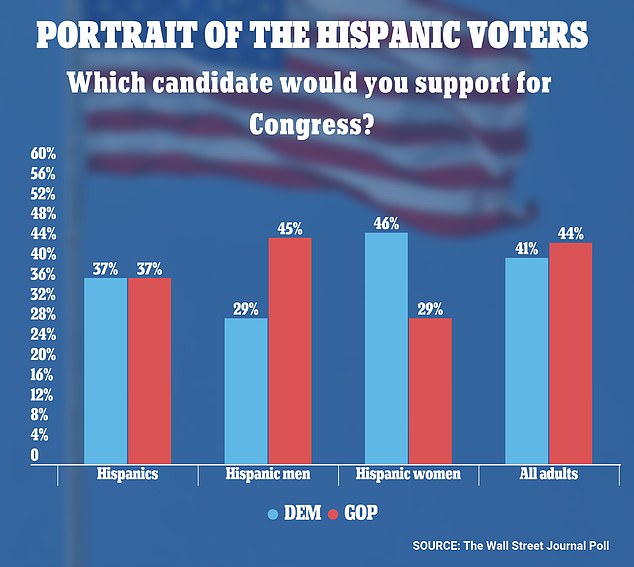 Once a reliably Democratic voting bloc, new polling from The Wall Street Journal showed even support for Democrats and Republicans among all Hispanic voters going into the 2022 midterm races

The Journal poll found that 54 per cent of Latinos currently disapprove of the job Biden is doing, versus 42 per cent who approve.

In 2020, Trump – whose campaign dedicated significant resources to Latino outreach – did see gains.

According to a Pew Research Center report, Trump received 38 per cent of the Hispanic vote, compared to Biden’s 59 per cent.

In 2016, Trump – the winner of the race – received just 28 per cent of the Hispanic vote, while Democrat Hillary Clinton walked away with 66 per cent.

The party of Trump had even worse midterm performance in 2018, Pew found, with 72 per cent of Latino voters supporting Democratic Congressional candidates and 25 per cent supporting Republicans. 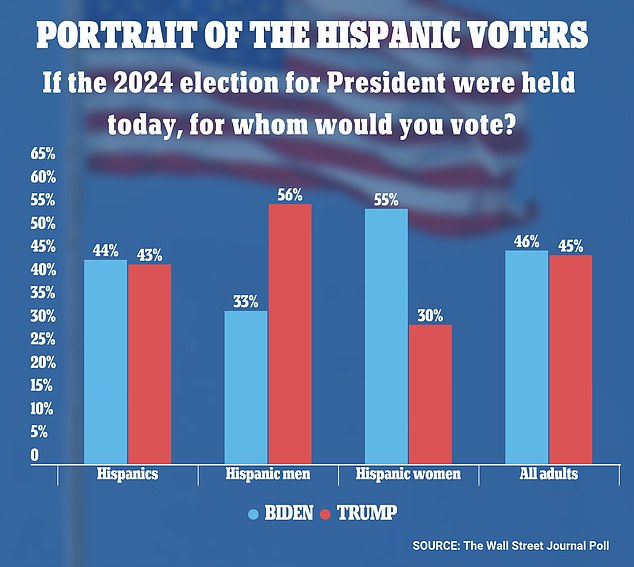 The poll also showed President Joe Biden and former President Donald Trump nearly tied for support among all Hispanic voters, despite Biden winning the group in 2020 by 21 points. Like in every demographic group, there’s a gender gap, with women more supportive of Democrats

Driving the trend toward Republicans now could be Hispanic mens desire to see the country return to Trump’s economic policies.

But this held true on economics as well, with Hispanic women favoring Democratic economic policy by a margin of 10 points.

‘You see in this poll that there’s a group of Hispanic men who were without a doubt enticed by Trump and have become more Republican. We have more work to do on that,’ Democratic pollster John Anzalone told The Journal.